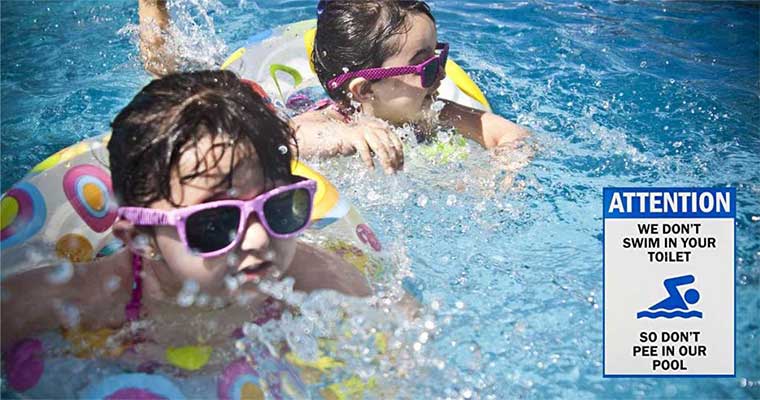 So it seems that everyone is peeing in our pools and it’s not just your kids. A new scientific test confirms finding up to 75 liters of urine in 100% of pools and spas tested by the scientists in Canada.

It is an unfriendly and to most a repulsive act that usually goes unnoticed, but many pool users have speculated forever that people are peeing in the pool. Hmmm, maybe that’s because they are guilty of it as well.

How Do They Test For Urine In Pools?

The test works by measuring the concentration of an artificial sweetener, acesulfame potassium (ACE), that passes through the body unchanged and is generally found in processed food.

After tracking the levels of evacuated sweetener in several public pools and hot tubs over three weeks, they calculated that swimmers had released 75 liters of urine and every pool they tested had urine present in the water.

In entirety, the scientists tested 31 various pools and tubs and discovered ACE to be present in 100% of the samples, with concentrations up to 570 times the background level in tap water samples.

Researchers were unable to confirm exactly how many swimmers were preferring to silently relieve themselves in the water rather than taking the barefoot trip to the nearest bathroom; the findings imply that the urine levels were being increased by the end of the day.

I Thought The Pool Water Was Getting Warm

It is a bit disarming to read about your fellow swimmers nearly peeing on your leg, and you may even want to rethink your next chicken fight partner, but there is, even more, cause for concern when it comes to hot tubs and spas. The researchers found hot tubs to have even greater urine levels. One resort Jacuzzi had more than 3X the concentration of sweetener than in the worst swimming pool.

Blackstock said, “We want to use this study to promote public education on proper swimming hygiene practices, and we should all be thoughtful of others and make sure to exit the pool to use the restroom when nature calls.”

Is Urine In The Pool Harmful?

Although urine is sterile, compounds in urine, including ammonia, urea, and creatinine have been found to react with disinfectants to form byproducts known as DBPs that can lead to eye and respiratory irritation. Long-term exposure to the compounds has been linked to asthma in professional swimmers and pool workers.

Scientists suggest at some point it may be possible to use ACE as a test to ensure that urine in swimming pools and spas is held to a sanitary level. The long-standing myth that there is a chemical that turns the water blue when someone pees in the pool is false as explained by Snopes so, for now, you will just have to hope your family and friends are making it to the bathroom in time.

Recommendations For Cleaning Your Swimming Pool

We recommend having your pool serviced weekly to ensure its clean and safe for your family to swim in. And if a toddler or small child has the unfortunate event of the “floating snickers bar” kind, please call us right away, and we can get your pool cleaned up in no time.